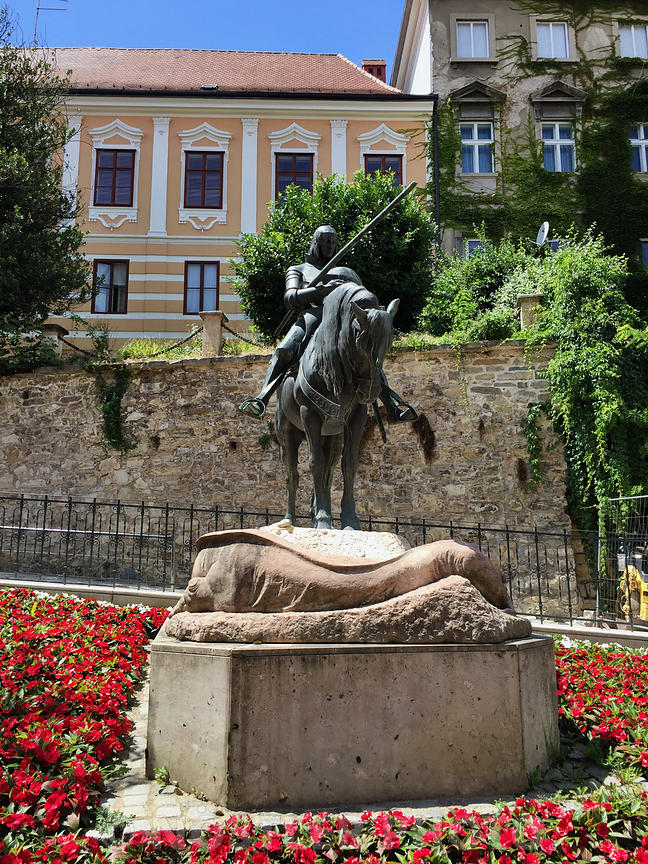 There are two equestrian statues of St George and the Dragon in Zagreb. This one is located near Stone Gate, the old entrance gate to the Gradec, an old fortified town from middle age, nucleus of modern Zagreb. This statue shows St. George after his fight with Dragon as he pays respect to the dead Dragon. The statue is on this location since 1994. Before that it was located in the garden of the Mazuranic house in Jurjevska Street 5. The original location of this St George and the Dragon statue was in Mallnitz, Austria, in front of Villa Liebermann. In 1937 the statue was given as a gift to Mr. Mazuranic and it was in Zagreb since then. The authors of the statue were Austrian sculptors Kompatscher and Winder.

In Christian hagiography Saint George (ca. 275-281 – 303) was a soldier in the Guard of Emperor Diocletian in the Roman Empire, venerated as a martyr. Saint George is one of the most venerated saints in the Eastern Orthodox Church, Oriental Orthodox Churches, and the Eastern Catholic Churches. He is immortalized in the tale of George and the Dragon and is one of the Fourteen Holy Helpers. His memorial is celebrated on 23 April.

According to the Golden Legend the narrative episode of Saint George and the Dragon took place in a place he called "Silene," in Libya. There was no such place, the name being perhaps a corruption of Cyrene. The Golden Legend is the first to place this legend in Libya, as a sufficiently exotic locale, where a dragon might be imagined.

This town had a pond large as a lake where a plague-bearing dragon dwelled that envenomed all the countryside. To appease the dragon, the people of Silene used to feed it a sheep every day, and when the sheep failed, they fed it their children, chosen by lottery.

It happened that the lot fell on the king's daughter. The king, distraught with grief, told the people they could have all his gold and silver and half of his kingdom if his daughter were spared; the people refused. The daughter was sent out to the lake, decked out as a bride, to be fed to the dragon.

Saint George by chance rode past the lake. The princess, trembling, sought to send him away, but George vowed to remain.

The dragon reared out of the lake while they were conversing. Saint George fortified himself with the Sign of the Cross, charged it on horseback with his lance and gave it a grievous wound. Then he called to the princess to throw him her girdle and put it around the dragon's neck. When she did so, the dragon followed the girl like a meek beast on a leash. She and Saint George led the dragon back to the city of Silene, where it terrified the people at its approach. But Saint George called out to them, saying that if they consented to become Christians and be baptized, he would slay the dragon before them.

The king and the people of Silene converted to Christianity, George slew the dragon, and the body was carted out of the city on four ox-carts. "Fifteen thousand men baptized, without women and children." On the site where the dragon died, the king built a church to the Blessed Virgin Mary and Saint George, and from its altar a spring arose whose waters cured all disease. 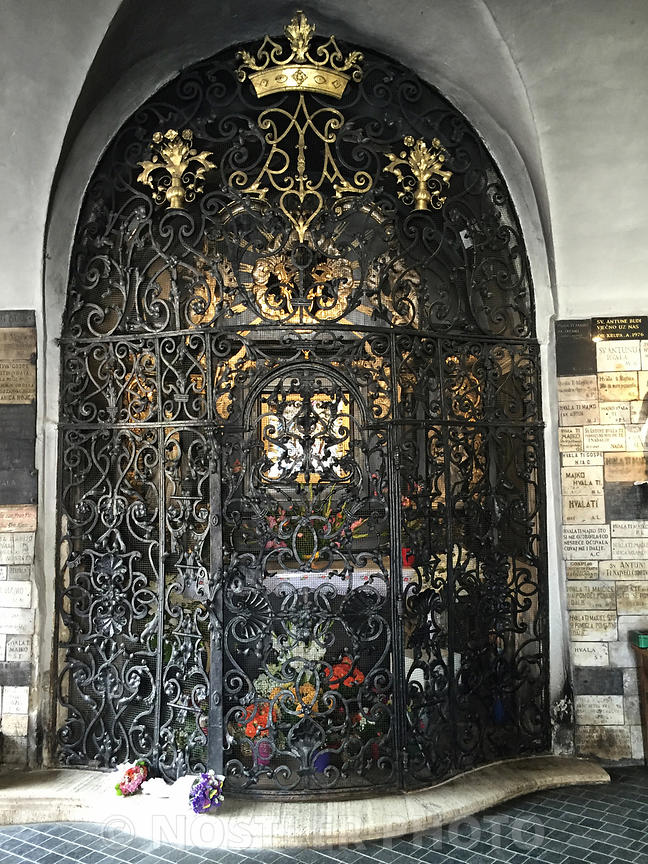